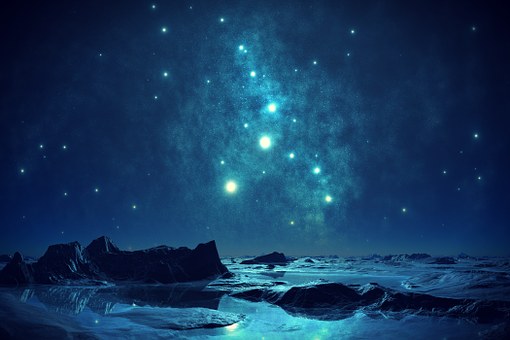 The Original Creator smiled favorably on one particular trinary star system that lies within The KalaZo Star Cluster.  Our star system has two yellow suns relatively close together, [known as a visual binary star system by itself].

A fascinating reality about being part of a binary star system is that half the year the sky is dark blue because of the position of the two suns.

SoVran and MiThos, are what we call our first two suns. They are separated by a distance of about 23 Astronomical Units, slightly greater than the distance between the planet Uranus and your own Star.

SoVran is the first of three stars that graces our sky. SoVran is known as a yellow class G star. It fuses hydrogen into helium to generate it’s power source.

SoVran has a sister star in MiThos. During the pairs 89 year orbit around a common center, the distance between them varies from 10 to 35 AU’s pulling their home planets along in the process.

Our third sister star is TeLios, a small red dwarf sun that resides in the outer reaches of our Trinary star system.  It is a relatively cool and faint star, approximately one tenth the mass and diameter of  SoVran or approximately 30% larger than the planet Jupiter.  It takes over 900 years for TeLios and her planets to orbit both SoVraan and MiThoz.

Imagine if you will…  Three solar systems within one light year of each other!

Three suns sharing orbits. They are the mothers of our creation. We call them The Three Sisters.

What makes this star system even more extraordinary, is the 4th planet that circles one of the trinary stars, is in a perfect solar zone where life not only exist, but is home to an advanced civilization, only slightly older than your own civilization.

We call our home world DianToz. Because our people of Diantoz are a part of this astounding star cluster, the night sky on our planet is an awe inspiring sight to behold.

Many a young child on DianToz will look up at the stunning night sky reciting nursery rhymes about our ‘Cousin Stars “ in the sky.

DianToz is also home to The Alpha Religion…